As way back as 2008, an Edwin Moses from Sireronsi village and an Amos Ove from Kongara were in an underground contact with Americans, Steve Strauss and Mike Holbrooke. Their dialogue was an interest to tap into the lucrative alluvial gold panning in Central Bougainville. 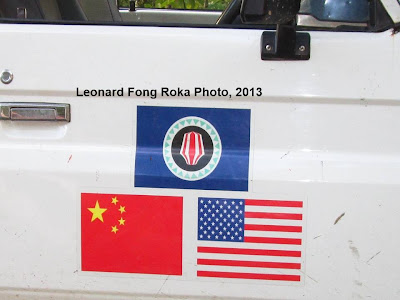 Jaba Industries company logo
Then they connected the Americans and their company Tall J whom were said to be specialized in small scale mining to the so called Meekamui Government of Panguna led by Philip Miriori (president) and Philip Takaung (vice president) a pair that, when talking about BCL to the media had being so anti-mining.


In early 2009, Edwin Moses, Amos Ove and Philip Takaung formed their own company under the blessing of the Meekamui Government which they named O’orang with all executives from their respective villages and Amos Ove as the manager and Edwin Moses as director to start formal negotiations with the Americans. 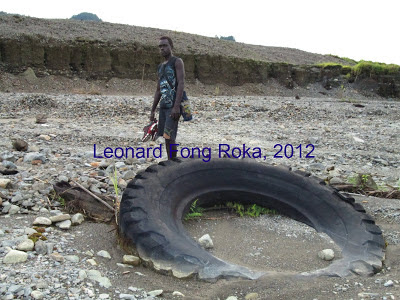 Tumpusiong Valley sedimentattion that hosts the gold
After O’orang was established, Tall J money began entering Bougainville. O’orang was assigned to lay out the ground work for possible mining operations in Panguna, especially the Tumpusiong Valley where Amos Ove was married. The valley had tones of gold washed from the Panguna mine’s long operations and today it is one of the main alluvial gold attractions in Kieta. The company’s attempts to lure the targeted people were often met with opposition but the report that went to America was of positive progress.


So back in America, there was excitement to have established a link on one of Pacific’s richest islands and their landowners, from debriefs O’orang passed on from Bougainville. Thus money flowed in and O’orang members earned American money and drove around in new vehicles.


In mid-2009, the Americans and O’orang met in Honiara to finalize a go-ahead for a joint venture on establishing an alluvial gold mining operation in Panguna. A week later, a team of nine Americans arrived in Panguna with a Komatsu front-hand loader and three other equipment for sampling and other preparations under the leadership of Steve Strauss to learn that nothing had being done out of their money. 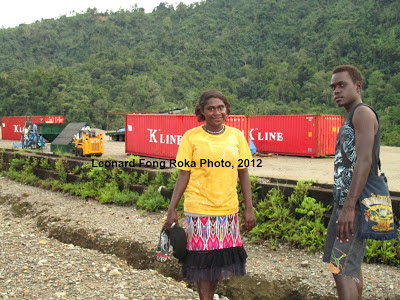 Jaba Industries operations site in the Tumpusiong Valley
Spending months in Panguna, with Philip Takaung also renting rooms to them, they tried to sort things out themselves. Half of the Americans returned seeing that their money was wasted on liars that the people hardly respected. Even Amos Ove was making his own money by having the mechanical loader on hire after they were chased out of the Tumpusiong Valley in their first attempt. But the other half stayed on under the leadership of Steve Strauss and Mike Holbrooke.


With the Americans around them and Amos Ove gone due to illness, Philip Takaung and Edwin Moses began to fast track negotiations with various people around Kieta. They visited the Eivo area; went into certain parts of Kokoda; frisked the whole Panguna valley for partners, especially the Tumpusiong Valley. They entered Kupe, where an Australian company once had a gold mining operation in the 1930s, three times and on the fourth visit, angry Kupe people chased them.


By Christmas 2009, all Americans left accept Strauss who was so concerned in finding ways to recover the money they had spent. By early 2010, the Americans had spent some K1.7 million through O’orang in order to secure alluvial gold mining operations with the people. 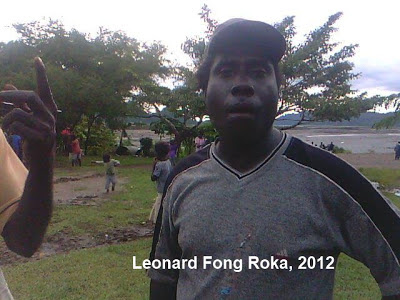 Mr. Michael Tona, MTRL deputy chairman
As the year was fast winding down Strauss saw no hope and was packing to leave Bougainville when a Michael Dendai and Michael Tona who were not involve in Tall J first attempts in the Tumpusiong Valley walked into him in Panguna with a claim that they and their families owned much of the west Tumpusiong Valley tailings area.


Strauss was relieved and forged an agreement with the pair and also donated an open bag land cruiser to serve the Tumpusiong communities that was controlled by Michael Dendai since.


In a series of meetings held at Panguna within a period of two months, a new company, Middle Tailings Resources Limited (MTRL) led by Michael Dendai and Michael Tona was born. O’orang also fought hard not to be left out in this new relationship and was accepted and Strauss again fought to secure more off shore funding for this new operation. 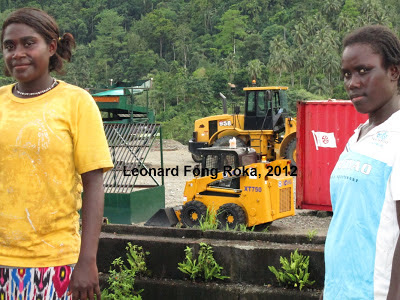 Closer look at the camp in the middle of the BCL created barren land
This time funding was secured from a Chinese partner and more Americans began to arrive to pave the way forward for the Tumpusiong project. And seeing the Chinese money on their hands Dendai and Tona carelessly fast tracked the go-ahead of the project without engaging the majority of the west Tumpusiong community members in decision making. But still the project was steaming on with the happy MTRL gang.


So the joint venture named as the Jaba Industries was consisting of O’orang owning 33.33% shares; MTRL owning another 33.33% and Tall J holding the last 33.33% of shares. In all three joint venture partners, the unidentified Chinese financier was catered for; that is, the Chinese were shareholders in all three companies. At the same time, Tall J had certain percentage of shares in the 33.33% shares owned by O’orang in Jaba Industries concerning the K1.7 million Tall J money O’orang corrupted.


All things sorted, equipment and plants, funded by the Chinese, began arriving one at a time for the whole of 2011 and half of 2012; plants were kept at Birempa on the Morgan-Panguna mine access road near Edwin Moses’ home. Plants include dump trucks, an excavator, a front-hand loader, a number of open bag land cruisers and gold processing equipment. And during the Christmas break of 2012, establishment began at Toku village in the western section of the Tumpusiong Valley. 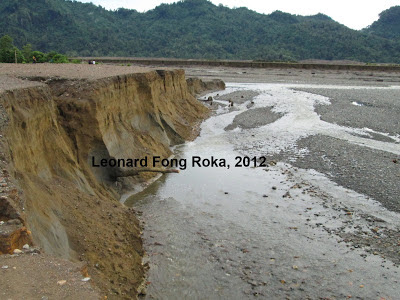 With heavy sedimentation intact, the project could last
Alongside the development conflict also surfaced. The locals were brawling with the MTRL executives over decision making processes as landowners witnessing the fact that Michael Dendai was running the MTRL as his private business because on paper, collective decision making was the way and that majority beneficiaries should have being the community.


Also despite the fact that the men involved with the creation of MTRL were the close relatives of current ABG mining mister, Michael Oni, the parliamentarian have being said to knew nothing of this development. So people also public condemned MTRL and Jaba Industries as illegal businesses.


The main village of Toku further boiled with strikes. In a launching and dedication ceremony held in December 2012 just before Christmas at the mining site, the other half of the Toku villagers did not attend nor did they ate the food that was brought to them.


Furthermore, the locals were angered by the project when, all executive positions in the joint venture was held by the O’orang who were not even landowners in the Panguna mine site or the Tumpusiong Valley but were from the inaccessible by car hinterland villages of Pangka and Mosinau to the south-east of the Panguna mine who now squat in the remains of the Panguna township causing a lot of disharmony with the people owning the Panguna mine and town areas like the Moroni people and even the Panguna District administration. 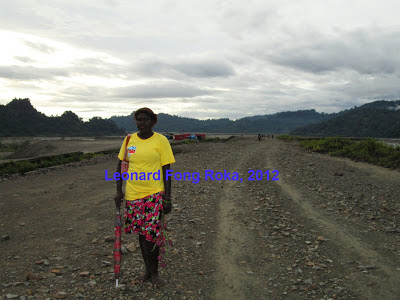 Tumpusiong Valley
Most of the Tumpusiong men were employed as security guards earning a K75 per fortnight. Plant operators and so on were the O’orang employees. And point of argument was, to the former BRA fighters, Mr. Dendai was not at home during the conflict and now was walking over them thus he was not accepted to be a sole decision maker in this project.


Somewhere in late 2012, the Chinese partner under the cover of Jaba Industries announced that it shall be releasing a K300 000 community development packet and two vehicles for the Tumpusiong Valley around the 2012 Christmas period. The people waited as they watched the test-run of the operations that produced a positive result in a week’s operation in January 2013 that was shipped overseas as a sample.


But to their dissatisfaction in the mid-January of 2013, a new accusation surfaced that the awaited K300 000 development packet was already deposited into Michael Dendai’s bank account in 2012. Without any hesitation, the villagers torched the gold processing equipment in broad day light.


After this, all Tumpusiong men working as security guards at the mining site walked off, with a demand to Jaba Industries to solve the issue or pack up and leave.
Posted by Leonard Fong Roka at 18:10

Leonard Fong Roka
Panguna, Bougainville, Papua New Guinea
I come from the Tumpusiong Valley that is welknown as the Jaba Tailings area of the Panguna district in Bougainville. I was born the first son of a family of five children in 1979 at Arawa from a mixed West New Britain and Bougainville parentage. In 1986 I began my schooling at Piruana VTPS but my education was disturbed by the Bougainville Crisis in 1990 as I was doing Gr 4. As the Peace Process came in, I resumed schooling from 1995 and ended up at UPNG in 2003 but then left from my year 2 in 2004. From 2004 to 2010 I was grounded at home taking up part-time jobs with firstly, the NRI, the Electral Commission of PNG and the Ioro Roadworks from 2007 to 2010. And this year 2011, my spirit decided to be educated so here I am at Divine Word University.