Bougainville is said to be the largest and richest island of the Solomon archipelago. In the dream days, oral history claims that most traditional trade goods from as far as Malaita Island ended up in Bougainville. In fact, this is still a mutual practice today for the divided people, where there is always a presence of traders from all over the southern Solomon in the many popular post conflict Bougainvillean markets. 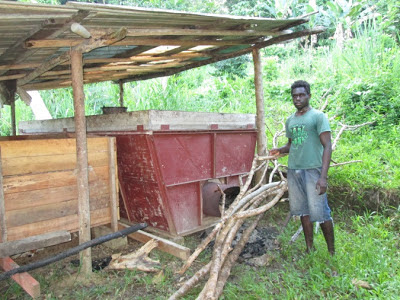 Divine Word University student, Shallum Tabea at my cocoa dryer in Arawa
This is one indicator that, in economic terms, Bougainville has the potential—without a large scale mining project—to be an economic power house to its citizens and its sister islands and people that make up the economically weaker independent state of Solomon Islands.


In Bougainville’s economic history, the year 1989, should be noted as the year that the island economy that was driving the state of Papua New Guinea came to a standstill due to the armed secessionist conflict. This crisis was the outcome of the systematic denial of Bougainville freedom to decision making for its betterment; rather, Bougainville was a slave to aliens that exploited her and gave back nothing tangible in economic terms.


To Bougainville and its people, subsistence economic activity was the mainstay through the pre-colonial days till today. Bougainvilleans live by toiling their customary land; growing food crops and domesticating animals for food are an ongoing art of survival.


However, for the sole benefit of PNG, colonialism introduced mining into the Bougainville psyche. This had many Bougainvilleans to see that a massive export oriented resource extraction industry is the only way for economic progress in most developing countries.


Thus leaders in the ABG and even external advisors want to see the reopening of the Panguna mine as an impact project to kick-start the Bougainville economy.


But what most Bougainvilleans should learn or be taught is the massive scale of resource extraction industries in PNG that has no physical evidence of positive change in the society and people. Everywhere, one travels in PNG towns there is urban decay; porthole infested public roads and streets; fearful squatter settlements and massive unemployment, crime and an Asian takeover of cottage businesses that the Papuans & New Guineans ought to be owners of.


But to the Papua New Guineans, this is positive development or a way to development despite the fact that this is a globalizing world where natural resource exploitation is at an alarming rate out-matching the economic growth rate of PNG that is again, outstripped by the population growth; and not that 17 century when Europe began painstakingly embracing industrialization through step by step growth taking off from simple agriculture.


That is, the Bougainville government and people should invest into any cash crop that the land of Bougainville can support. And two such crops that had long economic impact on Bougainville are cocoa and copra.


In the 2008 research paper by Ian Scales and Raoul Craemer, Market Chain Development in Peace Building, it was noted that the Solomon island of Bougainville was the major producer of cocoa for the PNG economy.


The paper noted that productions ceased in 1990 with the spread of the crisis. But from 1997 as peace began gaining momentum, cocoa production rose significantly at an annual average of 11 200 tonnes. This growth by 2006 had reached an average pre-crisis mark of 15 000 tonnes per year. But to Bougainville’s disadvantage this cocoa is recorded as East New Britain cocoa since all buyers of Bougainville cocoa are Rabaul based.


Among the most notable rascals of Bougainville cocoa and even copra are these non-Bougainvillean companies such as Outspan, Garamut and Agmark. They also have local Bougainvillean agents that buy cocoa or copra under their license.


This is significant revenue for Bougainville if Bougainvilleans can establish local Bougainvillean companies for direct export of their resources to international markets instead of feeding PNG’s East New Britain province and others.


In the same situation also is the Bougainville’s alluvial gold small scale mining industry. Bougainville resources are not benefiting Bougainville but generating income for PNG; Bougainvilleans just labor to exploit their land as it was with the BCL.


According to Martyn Namorong’s 2011 article, Bougainville’s Weak Government Unable to Stop Looting, it is noted that Albert Kinani who is the head of the screening committee of the ABG commerce department as estimating that K300 million worth of gold is leaving Bougainville illicitly.


This figure could be supported by a 2010 story by Satish Chand, Bougainville Bouncing Back that noted a local essayist as smelting 1.5 to 2 kilograms of gold per week. At the price of US$43 per gram this converts to US$ 64 500 to US$ 86 000 valued worth of production per week.


With full control of these few but currently major resources for the peoples’ cash income, Bougainville can be sure to develop other still idle agricultural resources that are struggling to develop because the Bougainville leaders don’t want a self-reliant Bougainville by protecting local farmers.


All these problems and myopic politics is the fruit of Bougainville leaders playing Bougainville politics in Papua New Guinea shoes despite the fact that the island had lost 20 000 people under the lethal PNG shoes of politics.


Thus, looking at these few agricultural crops and sustainably exploited non-renewable resources, Bougainville does not really need a massive impact project to kick-start development on the island. But all Bougainville needs is responsible management skills to the people and a visionary political leadership at the government level.
Posted by Leonard Fong Roka at 17:32

Leonard Fong Roka
Panguna, Bougainville, Papua New Guinea
I come from the Tumpusiong Valley that is welknown as the Jaba Tailings area of the Panguna district in Bougainville. I was born the first son of a family of five children in 1979 at Arawa from a mixed West New Britain and Bougainville parentage. In 1986 I began my schooling at Piruana VTPS but my education was disturbed by the Bougainville Crisis in 1990 as I was doing Gr 4. As the Peace Process came in, I resumed schooling from 1995 and ended up at UPNG in 2003 but then left from my year 2 in 2004. From 2004 to 2010 I was grounded at home taking up part-time jobs with firstly, the NRI, the Electral Commission of PNG and the Ioro Roadworks from 2007 to 2010. And this year 2011, my spirit decided to be educated so here I am at Divine Word University.